The event took place in St Andrew and St George’s Church in central Edinburgh. The Church’s café, Undercroft Café, is a member of ECCN.

Why?
The event’s aims were to provide opportunities for participants to gain practical knowledge to help them run their cafes better, and time for networking and sharing good practice. The programme was designed to achieve these. 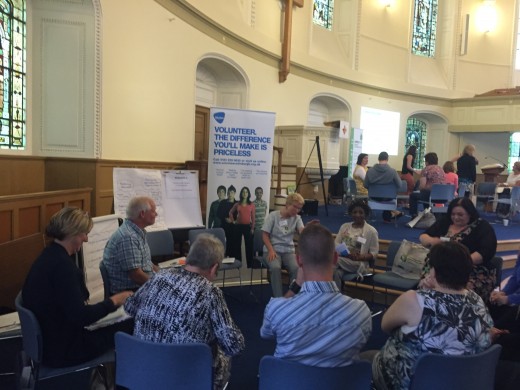 It focused on 4 short workshops, with everyone attending all four. The workshop’s topics were:

The topics were chosen by members of the ECCN. Two of the workshops were facilitated by community café staff.

Forty people took part in the event. This included volunteers, staff and managers from cafes that were in the process of setting up, as well as established cafés.

Before leaving the event, everyone was asked to write down and display one action they intended to take forward as a result of taking part in the event. Six cafes did so. Four stated they intended to look at their menu costings, three were going to use social media to promote their cafes, one had registered for the healthyliving award at the event and another intended to, and two planned to contact people they’d met. One also wanted to look at setting up a local community café network.

What happened next?
Informal feedback from participants at and immediately after the event was positive. To find out if any had been able to use learning from the event, or had followed up any contacts they’d made, participants were asked for feedback – firstly in October 2015, then again in December if they had not responded. Feedback was received from 8 individuals or cafes, representing 17 of the 40 participants.

Participants were asked the following: 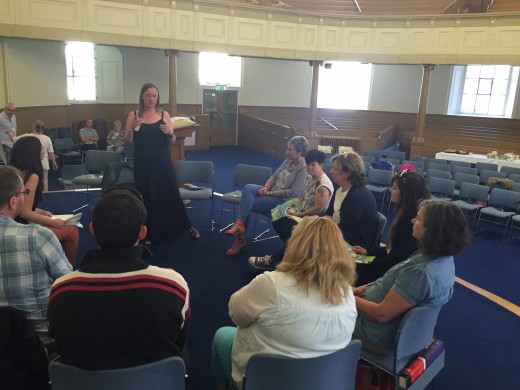 n able to use something they learned in the four workshops in their café?
If they’d been in touch with anyone they met at the event, or were planning to?
How they thought that CFHS could help their community café?

In addition, one of the workshop leaders fed back that there had been interest in setting up a buddying scheme for café managers looking for additional support or advice.

Suggestions how CFHS could help their cafes included:

CFHS would like to thank everyone involved with the event, especially the following:

Jean from St Andrew and George’s/Undercroft Café for her assistance with the event  planning, co-ordinating the use of the venue and the catering, and for facilitating a workshop.  Richard from the White House Kitchen for facilitating a workshop. Sally from Edinburgh Community Food for assisting with the event planning and for her input in one of the workshops. Nick from Volunteer Centre Edinburgh and Andrew from Scottish Community Development Centre for co-facilitating workshops.  Angela and Fiona from the healthyliving award for their support.

This entry was posted in CFHS updates, Events and conferences. Area of Work: Community cafes and retailing. Bookmark the permalink.