The most recent project to be launched by the older person’s charity Food Train, ‘Meal Makers’, is a community food sharing project which connects people who love cooking and want to be active in their community (Cooks), with older neighbours (Diners) who would appreciate home cooked food delivered to them every now and then.

At the time of writing Meal Makers is active in Dundee, Glasgow and Perth and Kinross but the intention is to take Meal Makers to every area throughout Scotland. 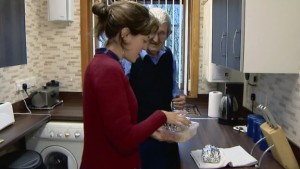 Malnutrition is a problem that disproportionately affects older people. 1 in 10 people over the age over the age of 65 suffer from malnutrition in the UK which is about 1 million people, approximately 80’000 of whom reside in Scotland. In 2013 Food Train’s CEO, Michelle McCrindle MBE, took part in a study tour of London based projects aimed at tackling malnutrition, food poverty and food access issues among older people. The trip was arranged by Community Food & Health Scotland, funded by Scottish Government and comprised people from community groups, government officials and intermediary group officers. The tour was arranged in direct response to the latest findings of the UK Malnutrition Task Force at the time.

The study group visited 10 different projects over 2 days, many were similar to existing work in Scotland and some were very new and innovative ideas. Of the 10 projects visited, it was a neighbourhood meal sharing project where local people cook and share extra portions of their own home cooked food with older neighbours, which particularly stood out. This would come to be the inspiration for Food Train launching their own community food sharing project ‘Meal Makers’.

The prospect of starting a community based meal sharing project in Scotland was appealing on a number of levels. As already mentioned malnutrition is a major problem amongst older people as many experience barriers in the form of affordability and accessibility of food, limited food services, decreasing mobility and a lack of cooking skills to name a few. Such a project would therefore provide a way for older people to access freshly prepared meals without encountering any such barriers. Furthermore, the study group recognised that such a project would have so many added benefits beyond food access. With the number of single person households continuing to increase in Scotland, social isolation persists as a major problem in society. Older people are particularly vulnerable to social isolation and loneliness due to the loss of friends and family, mobility and income, and of course social isolation can lead to a variety of problems including having a detrimental effect on physical and mental wellbeing. So beyond being a device to provide older people with wholesome freshly prepared meals, a community based meal sharing project of this nature also had so much potential to combat social isolation and to encourage intergenerational cohesion within local communities.

Another factor which contributed to their decision to start their own community food sharing project was the feedback Food Train had received from their annual customer survey. Food Train are committed to delivering services that older people themselves have expressed that they would like to access, and year on year Food Train customers were expressing needs around cooking and that they missed freshly prepared cooking as a result of becoming more reliant on convenience food which could be easily prepared. After taking part in the study tour Food Train had found the way to meet this need.

The key to ‘Meal Makers’ is its simplicity. Meal Makers connects people who enjoy cooking (‘Cooks’) with a neighbour aged 55 or over (‘Diners’), who lives in their local community and would really appreciate a home cooked meal. Once a Cook and Diner have been matched, the Cook will prepare an extra portion of food when cooking in their own home and deliver it to their diner at a time agreed by both parties. Meal shares can occur as often as the Cook and Diner would like – weekly, fortnightly or just occasionally.

Meal Makers uses an online platform to match Cooks and Diners. To volunteer as a Cook you sign up online at www.mealmakers.org.uk and complete an online profile. All Cooks are subject to a Protecting Vulnerable Groups (PVG) background check and are required to complete an online food safety and hygiene quiz. Diners on the other hand come to learn about Meal Makers from a variety of sources including health practitioners, social work services, housing associations and a variety of third sector organisations. Meal Makers often make self-referrals as well, as long as the Diner is aged 55 or over and lives in an active Meal Makers area then they are welcome to sign up to the project. Diners provide their contact information, food likes and dislikes, health conditions relating to diet, and all other relevant information over the phone to a member of the Meal Makers team who will then upload this information to the online platform to create the Diner’s profile.

Once a Cook has completed their online quiz and have been through the PVG safeguarding process, they are able to log onto the platform to find diners in their local area. The online platform uses a GPS system which allows the Cook to see which Diners live nearby whilst still protecting confidential information. Once a Cook has selected a diner in their local area the Meal Makers staff will contact the diner to advise that they have a volunteer who would like to bring a meal round, and take this opportunity to tell the diner a little bit about the Cook (i.e. from their profile information). If the diner is happy to proceed Meal Makers will email the Diner’s contact details to the Cook who will then get in contact with the Diner to organise their first meal share. Meals that are shared through Meal Makers are logged on the system and the Meal Makers staff remain in regular contact with Cooks and Diners throughout their participation in the project, including a phone call after the first meal share to ensure that everything went well. Meal shares will continue for as long as the Cook and Diner are happy to continue participating in the project, and when and how often meals are shared are organised between the Cooks and Diners themselves. Typically Cooks share a meal with their diner on a weekly basis, but as mentioned this is not always the case.

Meal Makers is jointly funded by Scottish Government (50%) and the Rank Foundation (50%).

At the time of writing Meal Makers had made the following achievements:
Over 100 Cooks and Diners matches made
Over 800 meals shared
Over 400 befriending hours spent during meal shares

The ambition is to expand Meal Makers in a phase by phase approach across the whole of Scotland.

“I’m incredibly appreciative of Meal Makers and being paired up with Mary. I enjoy the meals but it is the company that makes the biggest difference.” Andrew (Diner)

“Russell went over and beyond my expectations, the meal was delicious and it was the first meal in ages I actually finished every last bit. I can’t believe that someone could be so kind.” Mary (Diner)

“Anne made some really sweet comments about Meal Makers, she looks forward to it all week and it’s the only time she eats green vegetables! We had a great blether – I love Anne’s sense of humour!” Lois (Cook)

“Meeting Allison (and her wonderful cat Cuddles) was awesome! She has so many stories to tell, and was really appreciative of the food.” Katy (Cook)