This case study looks at how a community gardening project started from a conversation between neighbours about a small piece of unused land and has grown into a local charity hosting regular community meals and events, group gardening sessions and tuition, and a number of thriving connected projects including a bakery, a chicken co-operative, and a free-shop.

Granton Community Gardeners (GCG) is a community gardening project that has been running since 2010.

Granton is an area in North Edinburgh, recognised as an area of deprivation. The area was mostly farmland until the late 1920s, when the development of significant numbers of houses began, to meet the growing housing need in the city. Like many housing developments of a similar age, the tenements include good-sized communal back gardens. There are also lots of pockets of green space interspersed between the housing. These are maintained by the local authority and most are currently grassed.

Granton Community Gardeners began as a conversation between a group of neighbours at one end of Wardieburn Road. They felt that the land on the street corner could be much more productively used if it were turned into a garden. A simple survey was carried out of all the neighbours who overlooked the site. While most were supportive, the general view was that it would never work; that it wasn’t worth spending any effort on the site as it was likely to be vandalised. Undeterred, a ‘family gardening day’ was arranged and the whole street was invited to meet at the corner to start work. The day went much better than expected with 30 people taking part. Neighbours spoke to each other that hadn’t before. Some commented how good it was to be involved in something so ‘public’ for their street. A small number of the neighbours kept cultivating the site. Others joined when they saw that it was working and that progress that was being made. Many people became involved after chatting to the gardeners over the site’s fence. The new garden resulted in significant changes for the local people involved: as well as increasing access to vegetables and fruit, for many it enabled them to find out more about their community and make connections with others. A group committee was formed and the group was formally constituted in 2012. The group registered as a SCIO in 2017. 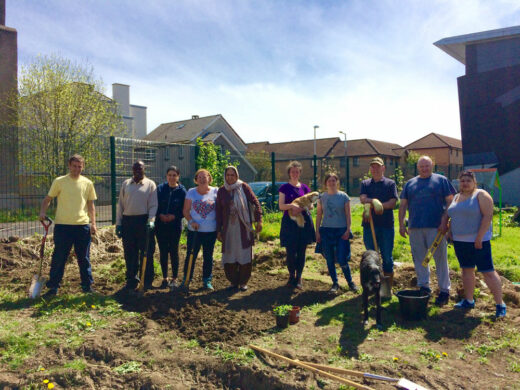 A group of gardeners

Residents living at the other end of the street approached the group about developing a site near them. GCG concentrated on these two gardens until spring 2014, when two further sites in the area were developed. In 2014/15 an extensive consultation process was carried out to start a new larger community garden in partnership with the Management Committee of Royston Wardieburn Community Centre, this had to be put on hold due to the land in question being developed for a new children’s nursery. But eventually in 2018 the group got the keys to the adjacent site where the old nursery had just been demolished. This was a ‘barren desert’ at first, but thanks to a huge community effort, it has since been transformed into a productive and beautiful community garden.

The main site is managed by a working group of staff and core volunteers, who oversee shared food growing, as well as all the different uses of the garden, including: hosting activities for school, and other young people’s groups; hosting large community events, and being a resource hub for local gardeners.

The project has found that for a lot of people, the diminished individual responsibility, and increased sociability and mutual learning of shared work makes it easier to get involved, compared with other higher commitment alternatives (e.g. allotments).

With three open gardening sessions per week, their approach is that ‘everyone’s welcome, but never obligated’. There is enough of a core group of volunteers to keep on top of things, so that other people can take part when they want to. Some of the members have gardening experience and there are some with farming backgrounds from different countries. This has brought a wide range of skills and expertise to the project, with some crops not normally cultivated in Scotland growing very well.

For more ambitious gardeners, the charity also supports local residents who want to grow food beyond the main garden. There are currently eight street corners, and four back-green areas that are under community food cultivation. Each of these are autonomously managed by small groups of local residents, always including at least one immediate neighbour. This small network of gardens is highly productive and there is a culture of sharing harvests and heavier work. 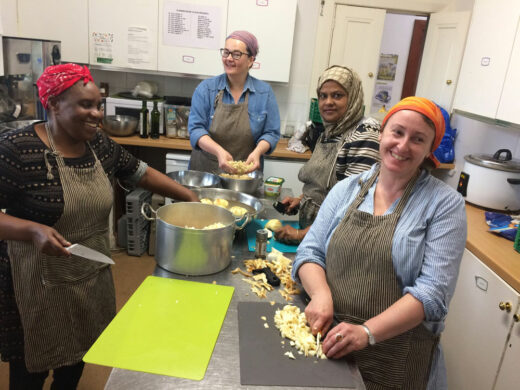 A natural progression of the project’s work has been setting up community meals, which aim to bring people together to meet and eat. At the very first meals, people taking part were asked to bring a dish to share that included produce from their own garden or a community garden. These attracted up to 20 people. In 2013, a Harvest meal attracted 60 local people, and that winter, a Burns Community Ceilidh sold out 250 tickets – this was run in partnership with Living in Harmony (based at Pilton Community Health Project) and Royston Wardieburn Community Centre. These Burns Night Ceilidhs have since become a very popular annual local celebration and have sold out for six years in a row. 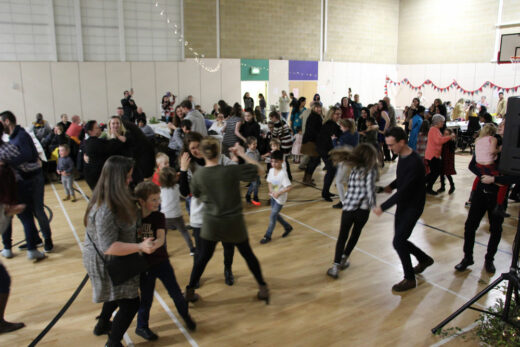 As well as special events, a culture has grown of sharing regular weekly meals. In their most recent form, there was a community meal, every Thursday evening at Granton Parish Church Hall from late 2018 until the coronavirus pandemic hit in March 2020.

The meals feature food grown in the local gardens, but most is sourced from FareShare, and other donations. Food is prepared by a cooking team of volunteers led by an experienced chef, and is provided free/donation. Everyone regularly participating is encouraged to contribute in some way – for example by helping wash up, setting tables, donating produce, or by delivering meals to people unable to get to the venue. The meals are open to anyone. Those experiencing food insecurity can access nutritious tasty free food, with dignity. It has also been interesting to observe over time, community connections and mutual understanding, gradually strengthening simply as a result of 30-50 neighbours from a wide range of age groups and cultural backgrounds, eating together around large tables each week.

GCG are interested in going beyond targeting ‘food poverty’, to considering what the opposite (‘food wealth’?) would mean. Shared meals, can be a focal point of a community, and can have benefits far beyond providing essential calories and vitamins. There are now lots of children growing up in Granton, for whom ‘community meal’ is a normal part of their lives.

GCG also actively support local youth work organisations and groups, as well as school and nursery groups to engage in gardening, including food growing and wider outdoor and environmental education.

GCG aims to provide encouragement and practical support, to anyone in the local area who wants to try an idea, where that fits with the organisations charitable aims. For example, someone constructed a very large dining table in the garden from recycled timber, so that lots of people can sit round and eat together.

A chicken co-operative has been established, where 12 local families or individuals joint own a small flock of egg laying hens. Everyone contributes £3 a month for feed, there is a rota for members to let the hens out every morning, and close them up at night. And the eggs are shared out. The hens have now contributed over 10,000 eggs to the local diet, as well as providing high quality fertiliser and slug control for the garden.

Granton Garden Bakery is a social enterprise which prides itself on supporting local producers by sourcing the best quality local ingredients, and making high quality bread available to the local community. The bakery is open every Saturday, and all loaves are sold on a ‘pay what you can afford’ basis. It’s been hugely popular, and now sustains one part-time job.

The Free-Shop, is like a small charity shop, housed within a large shed in the garden; except that everything is ‘free if it’s useful to you’. It’s become one of the most popular features of the garden, and has a high turnover of clothes, toys, books, and bric a brac. This saves people money, reduces waste, and encourages a culture of reuse, generosity, and reduced consumption of resources. It is managed by a local woman with a special talent for helping lots of people find what they need.

On day one of the lockdown in March 2020, some GCG members received a call from Spartans Community Football Academy saying that they had been donated a supply of packed lunches which would usually go to office workers. With a handcart containing 50 lunches, and some carefully devised hygiene protocols, they went to visit people who would usually come to the community meals, especially older people who living alone. These were days of high anxiety and empty supermarket shelves. They checked that people were ok, and noted those who were unable to get to the shops themselves. The next day there were more lunches, and the next.

GCG joined with other local organisations to form the North Edinburgh Covid Foodshare network (now ‘North Edinburgh Response and Recovery’). They became the point organisation for a section of North Edinburgh, and referrals started flooding in. Over the coming weeks, GCG recruited and trained a team of 30 volunteers who ended up delivering over 18,000 packed lunches, and over 9,000 other meals, including fresh vegetables, bread, eggs, and milk. Their key message was ‘Your community is here for you and there is food to share’. As the restrictions lifted, this was gradually phased out, with a big reduction when schools eventually returned (and assumed responsibility for ensuring all children have lunches). GCG continue to keep in touch with and support a large number of people, particularly families and older people living alone.

Initially the project began with a budget of £10 donated at the first family gardening day and some loose change they dug up, along with donated tools, plants and seeds. In 2012 a grant from the Big Lottery Fund Awards for All programme was used to run a ‘grow your own’ course which attracted new members to the project. Later it was awarded funding from the Voluntary Action Fund to run volunteer capacity building training. More recently the organisation has been funded by The Scottish Government’s Investing in Communities Fund, The National Lottery Community Fund, The Robertson Trust, and STV Children’s Appeal.

GCG have exciting plans to pursue an asset transfer to gain ownership of the big community garden. This is in order to secure it for the long term benefit of the community, and to develop the facilities to better fulfil its role as a busy hub of community activity. There are also ideas about reimagining the land management strategy of the local area, and incubating new food businesses to nurture and stimulate a local food economy in North Edinburgh. The community meals have been really missed during the season of coronavirus, and it is hoped these will be able to restart at some point in the coming year.